After 200 miles of driving and a stay in a Travelodge family room, this morning finally found us on our way to the very much anticipated event of the Autumn – The Digital Kids Show.

Event City was easy to find (well, most things are when you have sat nav, it’s true) and parking was quick and easy – in a big gravelly car park right next to the Trafford Centre. With 10 minutes until the doors opening we went and queued. And queued, and queued and queued. Yes, we queued for an hour before we even got in to the building… and then there was another 15 minute queue inside. Not exactly how I’d hoped to start the day – but actually, the kids were fairly reasonably behaved as there were lots of other kids to run around with. The game ‘creepers and Steve’ was played a lot.

And it was worth it when we did finally make it inside, because there was just this sense of overwhelming WOW.

First we came into contact with the giant Lightseekers stand, with it’s interactive digital games and trading card games too. Seb was very happy to get stuck in giving the IoS version a try, with Tyrax as his smart action figure hero of choice. Moving the figure in his hands also moved Tyrax on screen, and Seb picked it up quickly. It’s also possible to play the game without using a smart action figure, and as an added bonus the trading cards (playable as a game in their own right, as a tabletop game) can be scanned whilst playing the digital version to unlock augmented reality effects. Even better, there are lots of show offers on the figures, with £20 off the RRP for either the Tyrax or Mari starter packs.

Next up was the 100 player Minecraft Hub, a vast sprawl of computers all with Minecraft at various stages of play. Happily, being early on there were still a few gaps and the kids sat down and joined in. I’m sure they could easily have stayed there any played for hours, but one of the great things about the Digital Kids Show is that there are so many things to see and do, and a range of options that cater to all ages too – so D had her attention stolen by BoxHeadsCraft which was going on right next to the hub. 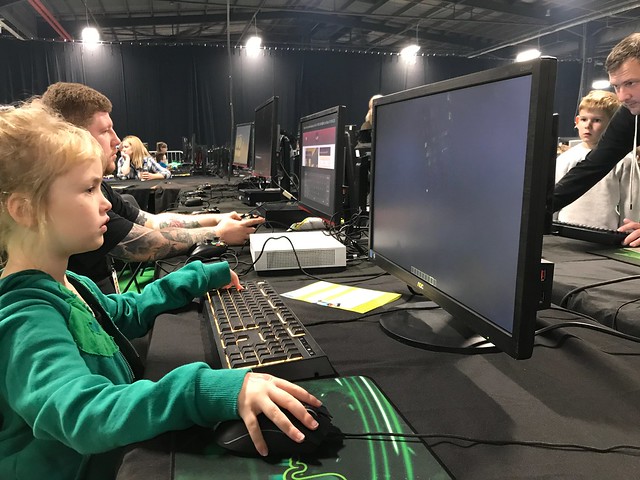 BoxHeadsCraft have given Minecrafting a whole new definition, with white cardboard cubes ready to be coloured in to create bespoke wearable Minecraft character heads, and t-shirts also available. D spent some time creating what I’m told is DanTDM, and later decided that a t-shirt was her item of choice to take home from the show too.

Whilst D was busy literally crafting, Seb visited Beasts of Balance and tried his hand at creating a truly magnificent tower of beasts, elements and miracles. The object of the game is to try and stack your beasts, evolve or migrate them, and keep them all alive – the more you do, the more points you score. There’s a show offer of 20% off too. 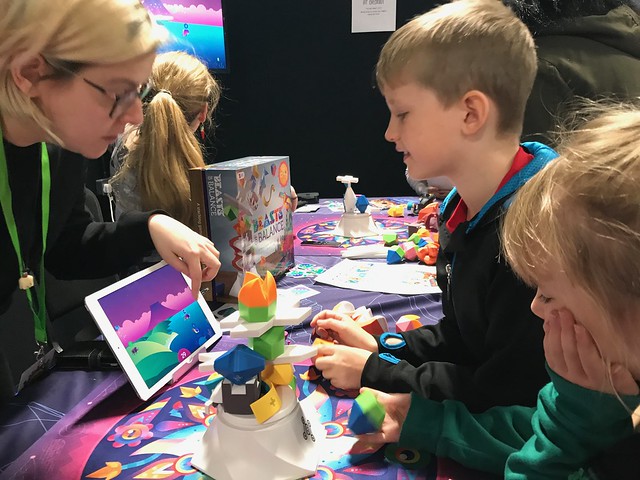 Being 3, Little B wasn’t really inclined towards the more technical offerings, but one thing she does love is scooting – and so the Scooter Party was right up her street. ‘Party’ is defined as ‘a social gathering of invited guests, typically involving eating, drinking and entertainment’. There was no eating or drinking, but there was plenty of gathering and entertainment as the kids whizzed around a roped off area on mini micro scooters. Next door was the Razor Crazy Carts (also speedily careering around an inflatable track) and next to them, lots of hoverboards with kids in various states of wheeling-arms attempting to ride on them.

Once the entertainment side of partying was over, Little B turned her attention towards the food and drink side of things, so we went to check out the catering on offer. With one small café of pies and paninis, a larger eating area with potatoes, chips, hot dogs and burgers, and a refreshments offering of ice cream, popcorn and sweets there were limited options to choose from – and much like the start of the day, seemingly limitless queues. Remembering the Trafford Centre sitting right next door, I declared a lunchtime walk was in order and we travelled the 10 minutes to find food there instead… but on the way, stopping to take in the Minecraft Show with Big B Statz and The Wizard.

Judging by the number of people with Digital D hand stamps and strange furry bugs stuck to their tops (thanks, Siemens!), quite a lot of Digital Kids Show goers had had the same idea as us, because the Trafford Centre eating establishments were full of small people dressed as creepers or wearing gaming t shirts. One Five Guys visit later and we were ready to head back – and we had a plan. Games bus, coding, car driving, Cozmo and then some Diversity dance action.

That is exactly what happened.

Seb joined a thankfully much shorter queue and got busy with some gaming on the #Razerbus, kicking my bottom in a game of FIFA18 where I somehow managed to score an own goal. D found the smaller, but still just as awesome TechTruck and spent a good half hour jumping around to Just Dance with some new friends she made. And Little B loved the Barclays Digital Eagles with their giant Raspberry Pi whack-a-pip game (probably not what it’s actually called, but it what it did!).

Whilst the kids were all happy I went and met a giant StikBot (we have a StikBot at home and love creating animated adventures with him – as well as some non-animated adventures where he falls off mirrors and windows and mountaineers around the mantelpiece) and then had my attention very much taken by Cozmo. 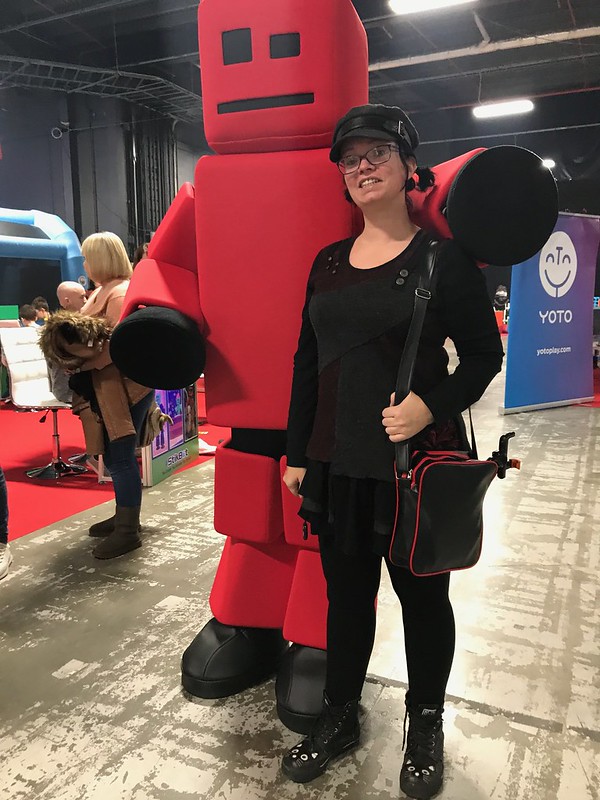 If you’ve not heard of Cozmo then CHANGE THAT because he’s awesome. He can lift his power cubes, interact with you and play games, or even be programmed to recognise – and miaow at – your cat. Plus many other things… I could write a whole post just about that. But I just love his expressive little face.

We were on our way to grab seats to see Diversity, when we were stopped in our tracks by Junior Stem, who suggested we should ‘build fantastic lego models, then bring them to life’. Some #digikids had already done this, and the amazing fairground rides with motors and lights sucked Seb right in and we were waylaid, very happily, for half an hour. The step by step instructions were easy to understand and we soon ended up with fully functioning fairground rides of our own.

Diversity were the best way to finish off our day, with a fun filled 30 minutes of giant balloon bouncing, BopIt as you’ve never played it before, and a rendition of Uptown Funk that got everyone jigging along.

Actually, I should say ‘nearly finish off our day’, because the final bit of awesome occurred as we were walking out and D spotted The Wizard who had decided to do an impromptu meet and greet. We didn’t queue for any of the other YouTubers because the kids weren’t that worried about it and the queues were long – but The Wizard was the one they really wanted to say hello to and there he was! So thanks, you’ve made our day! And what a day it was, with all the fun and games and Raving Rabbids meaning that the kids are all now happily snoring – and Santa has a whole lot of great ideas for coding Christmas gifts.

One day was enough for us (my legs are tired!) but there is definitely good scope for spending the whole weekend at the show, and good news – you can if you want. Because it’s on tomorrow too ?

The Digital Kids Show was / is on between the 18th-19th November at Event City, Manchester. Doors open at 10am for pre-booked tickets, or 11am for tickets on the day. The Digital Kids Show website has all the details I’ve not been able to fit in here – because there’s so much more I could say, and many things that we didn’t do ourselves. Take a look, and see!

One Response to "Review: A Day at the Digital Kids Show #digikids"