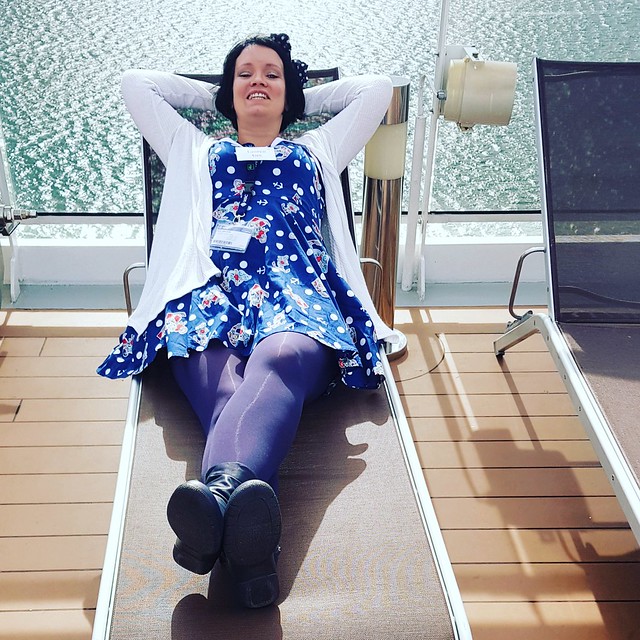 If you have a family, and you like to travel, then it’s fairly likely that you will think the same.

And this is why:

Prior to the 4th October, I’d never been aboard a cruise ship. Not for lack of wanting, more for lack of money – cruises in general aren’t cheap and I wasn’t sure whether being aboard a floating city was really the thing for me. That said, I do like boats, and I love sailing, and travelling is awesome too… so there are lots of reasons why I would like cruising too.

Spending a day on board the MSC Preziosa for BlogCampOnBoard was the perfect way to test out my various ship-sized theories and find out if a cruise might be the next thing added to my holiday wishlist.

Driving into Southampton Dock Gate 10 (after possibly the most restful night I’ve ever had in the last eight years, at the Mercure Dolphin Hotel – honestly, it was really only the fact that I was off to do something slightly more exciting that got me out of the bed and away from my incredibly comfortable, calm hotel room) I was kind of overwhelmed by the SHEER SIZE of the MSC Preziosa. I mean, I know I was expecting it to be big but it is BIG.

because the usual capitalisation doesn’t do it justice.

Imagine you’re an ant, and you come across the sugar aisle in a storage warehouse. Not just the sailing ship of sugar bags, but the ‘feeding an entire bakery’ industrial sized kind of sugar bags are stacked there…all lined up and ready for the taking. That’s what I felt like. Overwhelmed, excited, and with only two legs rather than six. I think there is a good reason that the MSC Preziosa is graded as being a ‘Fantasia’ class cruise ship.

After getting through customs control and receiving my ‘allowed to be on board’ lanyard I got to use those two legs (and funky purple walking stick) to ascend the stairs and enter into… well, into another world really.

What’s inside the MSC Preziosa

The moment I stepped inside it was like I’d gone through some kind of portal and popped out somewhere miles away from where I was standing only seconds before. (A bit like Stargate, but with less sand and hostile things).

If I had just one word to describe the central lobby area, it would be opulence. Glass lifts whizzed to unknown floors. Sparkling stairs curved their way towards the upper decks. Comfortable seating areas sat atop plush, patterned carpets. I later found out that just one step in each staircase was filled with Swarovski crystals worth between 8-10,000 euros – I could buy two of my car with just one tread of the stairs (and granted, they do look a hell of a lot nicer than my car does too).

With that entrance still flashing through my brain, the rest of the walk through the ship to get to the Platinum Theatre was kind of a whirlwind of WOW.

Unlike my brain, the rest of my bodyfelt very stable. Despite being on a giant floating vessel in a large body of water, it was very easy to forget that I was in fact inside a cruise ship. The theatre we sat in to learn all about the other things we would find inside is big enough to seat 1600 people and spans three decks – that’s bigger than the Adelphi, the Criterion and the Lyric theatres in London, where I have recently been to watch shows! And we did get to watch a little show… the kids club cast members gave us a bit of an introduction to Doremi – a whole host of areas and activities for babies, children, and young adults aged from teeny weeny all the way up to seventeen. I know I would have been incredibly happy as a child to have the opportunity to splash around in the aqua park, do a bit of DJing, pass some time in the games room and show off my singing in a talent show or two… and I also know that my own kids would very much feel the same. 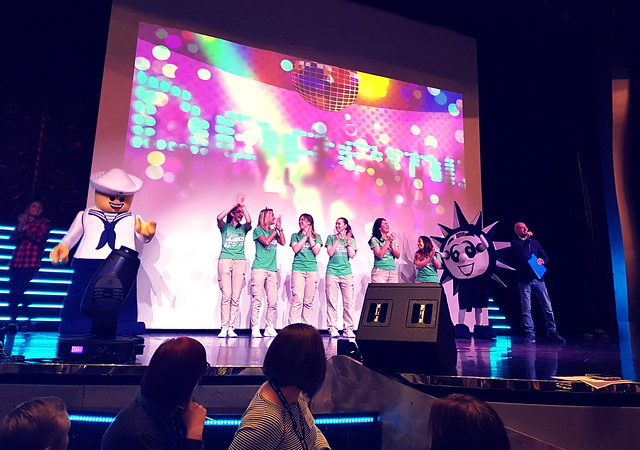 Of course, now I’m too old for the kids clubs myself, there are other areas of the MSC Preziosa I’d be happy to become far more familiar with. With 4 pools on board and the luxurious Aurea Spa whispering temptingly at me to go on and give it a try, there are lots of aqua fun options for adults too, whether spending time as a family or seeking a bit of relaxing grown up time while the kids are happy off in Doremiland. I didn’t get to take a dip whilst I was spending the day on the ship, but I did heartily wish I’d smuggled in my costume and towel, because LOOK: 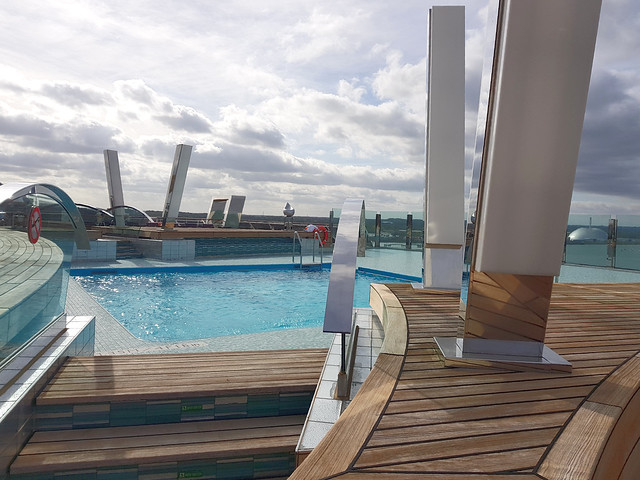 After watching a makeup and hair demonstration (yes, you can get people to make you feel as stunning as the ship, if you so wish), it was time to source some energy to keep on keeping on the rest of the afternoon. And the best way to get some energy – aside from lying around in the 4D Cinema or sitting back in a comfortable chair in one of the many themed lounges – is to fill up on food.

The Golden Lobster restaurant, sitting towards the rear of deck five – offered an interesting selection to choose from.

Whilst there was a tempting looking buffet on offer, I took the option of sitting in my seat and letting our lovely waiter bring the food to me from the a la carte menu instead. Being at sea (kind of) it seemed fitting to stick to fishy things, and before long seafood cocktail, pan seared fillet of red mullet, and ‘nutella cream’ (obviously NOT seafood) were making their way to my table, to nestle amongst the glasses of white wine, water and coca cola that our waiter Dodik had already presented us with. I’m probably a bit biased because I was by that point STARVING, but it was the best food I’d tasted for days. And I’d had a KFC the day before which for me hits the good spot every time, so that is high praise indeed.

After lunch, we got down to the blogging side of things. One wander of the ship later, and it was time to test our metrics mettle with an interactive quizzy type of thing in the Safari Lounge. As it happens, I’ve obviously absorbed far more blogging basics than I thought, because I ended up coming 2nd, happily grasping my prize of a miniature bag of maltesers. The perfect snack for the drive home… which was on its way but not quite imminent because first there were cocktails and questions to be had. 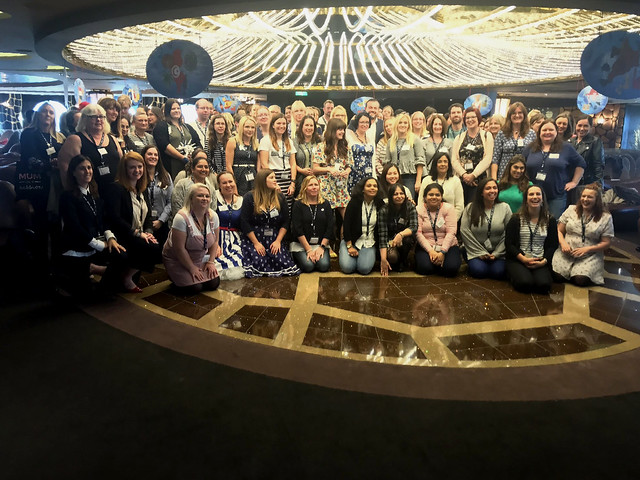 One Response to "I like big ships and I cannot lie"