If you like dolls, and you like limited editions then I’m pretty sure you’ll love the newly-introduced-to-the-market Tinsy Winsy Weeny Tots.

At least, that’s what I’ve gathered from D and Little B, who were incredibly enthusiastic about them right from the moment they were presented to them all packaged up in a tiny cardboard crib.

Whilst the name is a bit tricky to say (D has only just managed to get it down pat) the concept isn’t difficult to understand at all – they’re miniature replicas of a newborn baby, with a soft body, realistic facial features, and an ID bracelet complete with name and birthdate. Plus, each of the 15 different dolls available has it’s own beautifully designed miniature outfit – and unlike some dolls clothes they actually look like replicas of things that you might find on the shelves for a real baby. Assuming you like pink, blue or neutral clothes anyway…

Since the packaging can be used as part of the play, I was quick to step in and help the girls unpack the dolls – Little B was literally just about to rip the packaging open as I shouted ‘STOOOOOPPPP!’. She was glad that I did though, putting her baby ‘Jacob’ to bed in his crib, dressed in his little blue sleeping bag, is apparently very fun. And he had to come and sleep next to her when she went to bed, too.

With just a couple of packaging friendly stickers, and in the case of D’s ‘Out & About’ accessory set, a few plastic taggy bits, they were fairly quick and easy to unwrap without damaging the cardboard. D’s doll ‘Jasmine’ came as part of the larger accessories set, which includes a pram with detachable wheels, moving handle and hood that can double as a carrycot, a change bag, changing mat (although D insists it is a mattress/blanket) and a cloth nappy. 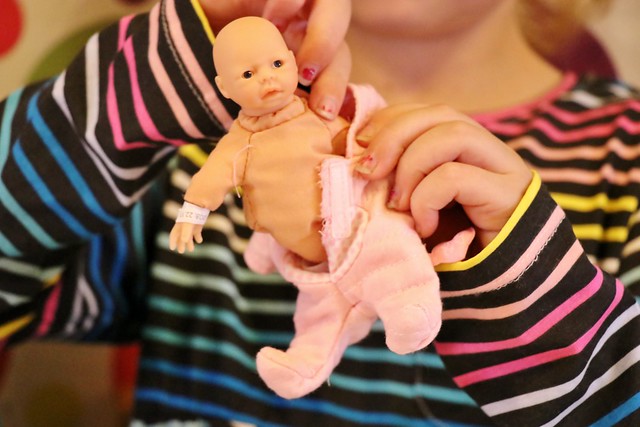 In fact, the first order of play for D was to get the bear themed pramsuit off her Tinsy Winsy Weeny Tot Jasmine, and make sure her nappy was firmly in place. Getting her outfit off was fairly easy, and putting the nappy on all went well (although I’m dubious whether a real baby would survive all the acrobatics involved!), but she did need a bit of help putting the pramsuit back on to Jasmine afterwards – being so realistic and miniature, the armholes are fairly snug. Actually, thinking back to when she was a baby herself I think she got a pretty good representation of what it’s actually like to try and get a baby to put their arms where they belong in clothes. 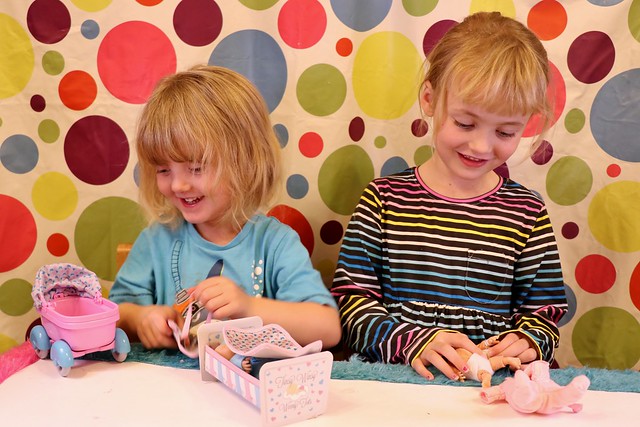 What we like about the Tinsy Winsy Teeny Tots, other than the fact that as D says ‘they’re so CUTE’ is that being small, they don’t take up too much room to store, and also it’s a set that can be added to and expanded, with the accessories and sets being interchangeable between different dolls. Little B has already made a request for another Tinsy Winsy Teeny Tot to be on her list to Father Christmas, and that’s another bonus – they’d make an excellent stocking filler both on account of their size, but also the price which at £7.99 is not too unreasonable given how much play the girls have had out of them already. The larger accessory set is £14.99 and there are two available – the Out & About Set and the Bedtime Accessory Playset which comes with a plastic baby bed including real working drawers, fabric bedding, a hanging mobile and an exclusive sleepy doll which can’t be bought separately. We bought both of our sets from Smyths Toys – which excitingly has just opened only five minutes from our house. I forsee future shopping trips on the horizon in the near future… 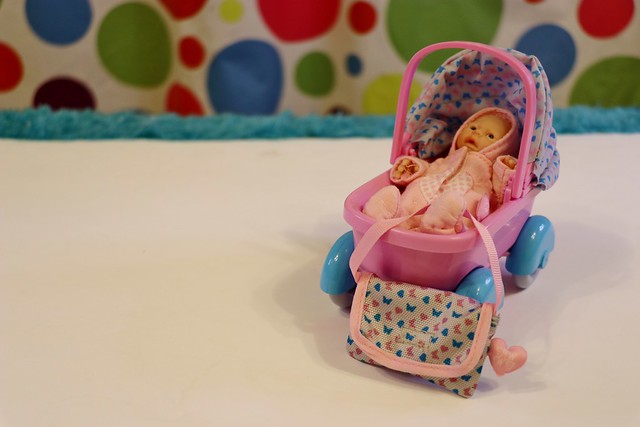