Little B and D have been saying that a lot, because Wissper has come to stay with us.

The new Wissper and Peggy starter set has everything little people need to get out and adventure with the very friendly 7 year old that is Wissper herself. 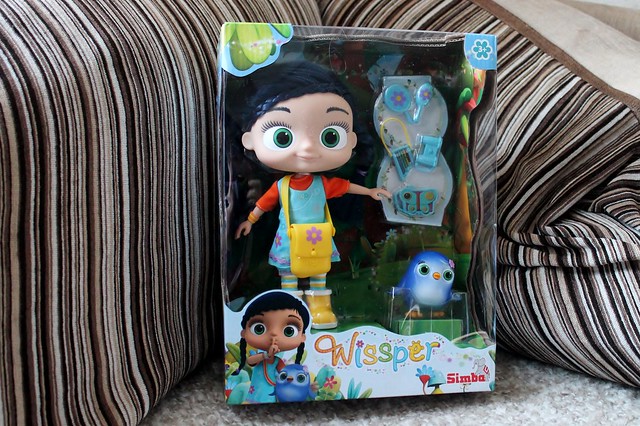 is the second thing they’re saying. Or rather, singing. It’s quite a catchy little tune, and also a bit sinister if said in the right way… like when you’re taking Wissper on a journey to try and find the Cheeky Monkeys (Little B’s ultimate favourite of all the animals Wissper can talk to).

In this case, big brother Seb has been designated the cheeky monkey. And apparently he’s the kind that misbehaves, so Wissper has to get a bit cross with him.

The set comes with a Wissper doll, Peggy figurine, bag and accessories (pan pipes, mirror, binoculars, and hairbrush). Wissper is articulated, and can be posed in many positions, which helps to encourage imaginative play (I’m pretty sure an actual person couldn’t bend in some of the positions she’s been put in!) Little B also loves that she can take her shoes on and off, and that she looks exactly like her character on TV. Wissper has been travelling everywhere with us recently 🙂

D is more interested in styling her hair, which is long enough to brush, plait and ponytail. She also enjoys encouraging her to play the panpipes, which apparently sound a lot like D singing.

The accessories are quite small (which you would expect, given that they are scaled to the size of the doll) and the bag can only carry one or two of them, so it’s worth making sure they all get collected up regularly or they are easily lost. It would be nice if the hairbrush actually had bristles too, but not a big problem since Wissper can get her hair brushed with D’s very own tangle teezer.

For any little one, Wissper fan or not, this is a lovely playset with lots of food for adventure thought. And if they’re not already a Wissper fan, they soon will be after playing for a while!

The Wissper and Peggy Starter Set has an RRP of £19.99 and can be found in Toys R’ Us stores from April.