What is Young Driver?

First off, it’s worth clarifying that when letting the kids loose in cars, it does not involve my car. Also, it doesn’t involve roads where the general public are driving their cars. Both of these things would most likely end in tears. court appearances and hefty bills. This is not the kind of Young Driver I am talking about.

What I AM talking about is kids who are desperate to give driving a try, in an actual car, with actual pedals and indicators and dashboard displays. Ever since the kids went to Legoland and drove a little lego car around a little track, they’ve been kind of obsessed with driving. I know the feeling, I was always desperate to get my driving licence too. The day I passed my test is still etched on my brain as being a momentous occasion.

Anyway, Young Driver – the official, insured, using safe and secure sites version – have provided the opportunity for the kids to live the dream a little earlier than I did, by offering the chance for kids aged 5 and upwards to have a go at driving a real, proper car.

And this is how happy they are about it: 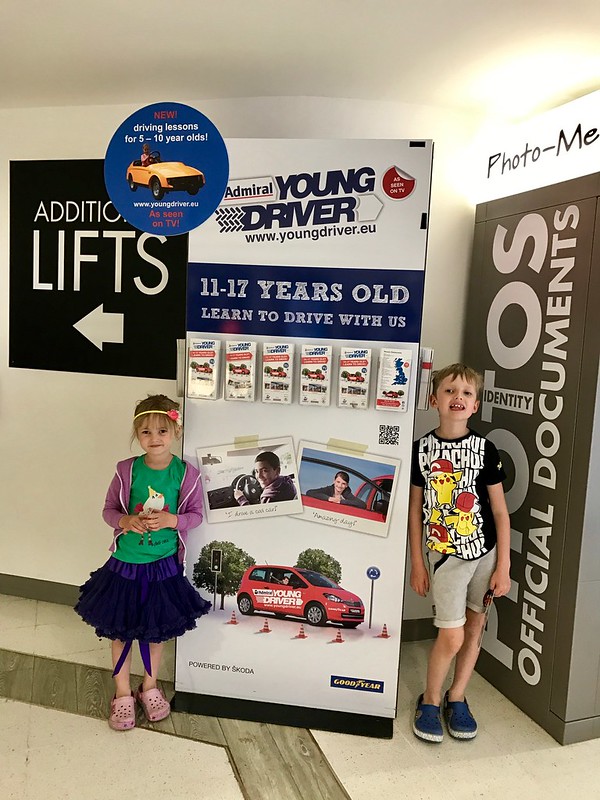 What happens at Young Driver?

We turned up at Brent Cross one Sunday afternoon recently, found the top floor of the multi-storey car park (which had been taken over for the sole use of Young Driver) and walked carefully to the registration desk to book the kids in for a 20 minute driving experience in a Firefly car.  Drivers aged 10-17 are able to use a proper full size automatic or manual car (or even drive a Bentley!), but the Firefly is a smaller, specially adapted version of an actual full size car, made with kids aged 5-10 in mind. They have an accelerator, brake, steering wheel, lights and indicators. They have a dashboard panel in the form of a tablet that indicates dashboardy things like speed (which is limited to a maximum of 10mph). They ALSO have sensors which automatically stop the car if it is about to crash. Actually, they are pretty much the same as my first car – a Morris Minor 1000 series – which also had only indicators, pedals and a switch for the lights, and avoided crashes by people staying out of the way of two tons of slowly moving pig iron (things have obviously moved on a bit since then). 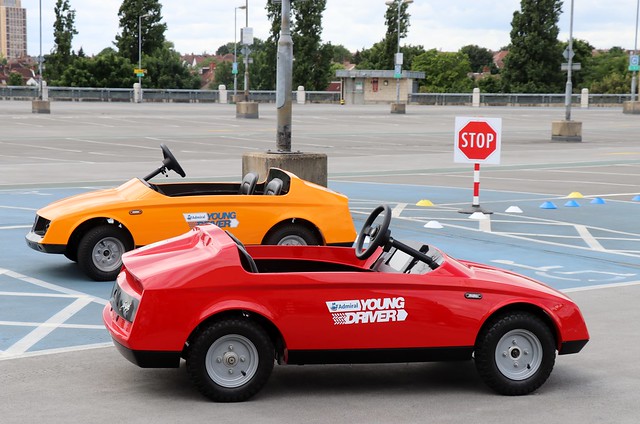 The session begins with an instructor getting in the car with the child who is going to be driving it. They instruct them on how the controls work, how to steer, and the rules of the ‘road’ – in this case marked out with little plastic sports cones. Then they assess how good they are at actually doing all of these things. Kids who have never driven before inevitably end up with a parent accompanying them for the remaining 15 minutes of the session, but if they have had more practice, they can drive without their parent. My kids obviously needed assistance, and so I ended up sitting in the passenger seat being driven around, with one hand on the kill switch to stop the car should I need to.

First up was Seb, who as it turns out is a reasonably competent driver. By this I mean he managed to steer and brake, and not squash [many of] the sports cones. As it was his first session, the ‘dashboard’ was not turned on, with the explanation being that it can be distracting when kids are first figuring out what they are doing. He was a little bit disappointed by that but I did understand the reasoning behind it. It also gave him an incentive to want to come back again and practice more – the boy who was doing a session after him had three sessions booked in a row, and had moved on to reversing by the time we left, which Seb was very keen to try next time. 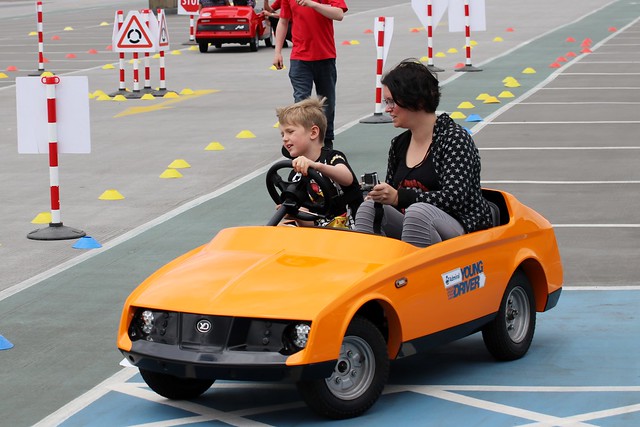 D was a whole other story. Aged 5, she is the minimum age for giving the Firefly a go, and it’s easy to see why as if I were a sports cone, I’d be in fear of my life. She understood the accelerating and braking, and she understood the steering… but achieving both at the same time was quite challenging. Not that she cared, she had a whale of a time, and slowly improved throughout the session without any recriminations or fear. It really does demonstrate the value of the Young Driver programme – having the chance to practice in a safe environment and slowly build up confidence and skills is definitely something I wish had been around before I started driving. 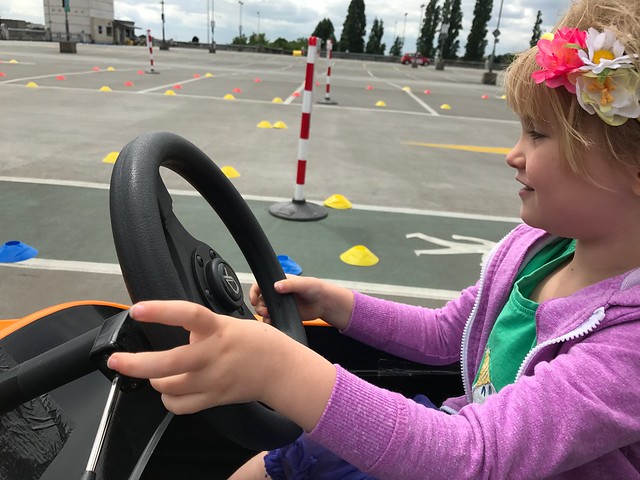 When we first booked, I did think that 20 minutes seemed like quite a short time, but actually for D it was perfect. She was pretty worn out from concentrating by the end of it and definitely ready for a break. Seb could probably have managed more, and I think next time we would book him for two sessions in a row so he could have the chance to build on what he is learning. Lessons start at £19.95, although it is possible to find deals on various ‘deals’ sites to get a longer experience, or cheaper individual sessions. Multiple sessions are also worth doing for the 5-10 year group, if you want to build up some skills, because – unlike the older 10-17 cars – Firefly cars move around the country, so only return to each location every three or four months. The full itinerary is listed on the Young Driver website. 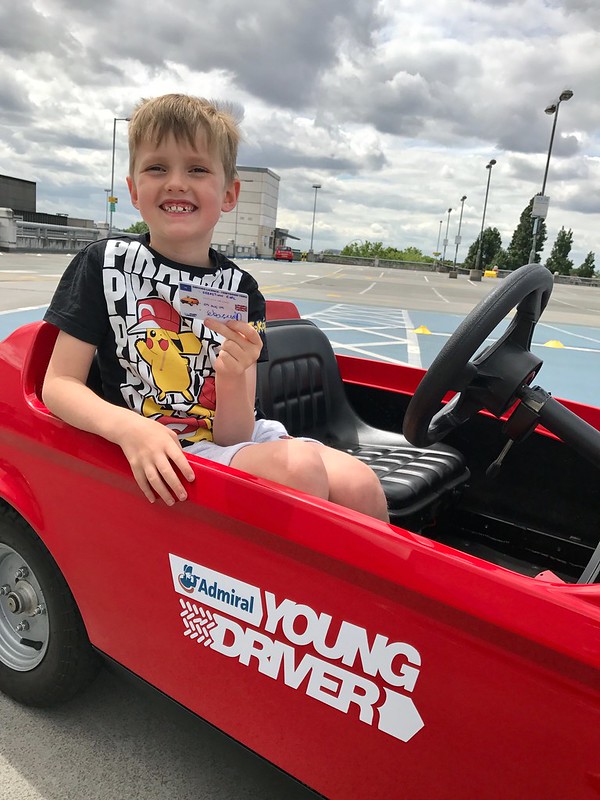 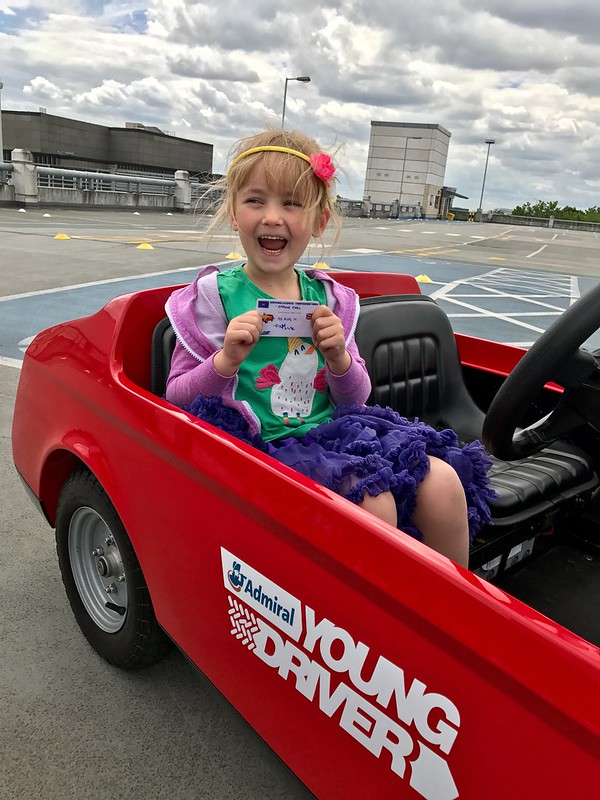 Seb and D were both very proud to be awarded their ‘driving licence’ at the end of the session, and are looking forward to coming back again next time the Firefly cars make an appearance near us. Little B is keen to give it a try as well, although she has a couple of years to wait! 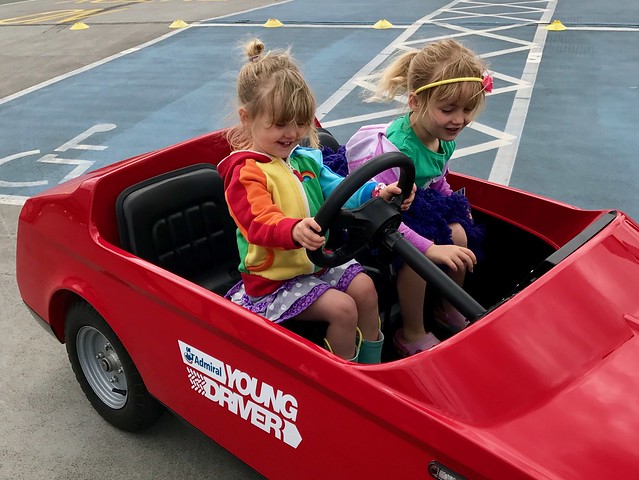 If you’re looking for a reasonably priced fun experience for your kids, that helps them to learn skills that are useful in the real world, then it’s definitely worth giving Young Driver a go. And I have to admit, it’s kind of fun as a parent too 😉