OR, this week, I lost my voice.

But despite the lack of voice, energy and sense in general, many things still happened:

I know I’ve read a lot of stuff. Tabletop Gaming magazine for one. A lot of D&D stuff for another. And ‘In Praise of Wasting Time’ by Alan Lightman, which – somewhat ironically since I bought it in kindle format – talks about the benefits of stepping away from screens and just taking the time to BE.

Or, in his words ‘sometimes the best thing to do is nothing at all’.

I agree. Sometimes I enjoy the nothing. A bit like the having no voice, which did have good moments.

Orphan Black, and the Unbreakable Kimmie Schmidt. That’s what I’ve been watching this week, and in a break from recent tradition I’ve actually watched more than one episode of things.

I also watched Judge Dredd, but given that I was drunk and it was 2am, and I was also ordering inflatable crocodiles, my memory of that is not as good as it could be.

I don’t think I made much this week. I did draw a picture of a cat.

Next week I am making a shelf. I think that will be far more satisfying.

Since I was headed to UK Games Expo, I felt it was only right to wear my ‘I see Dead Meeple’ t-shirt. 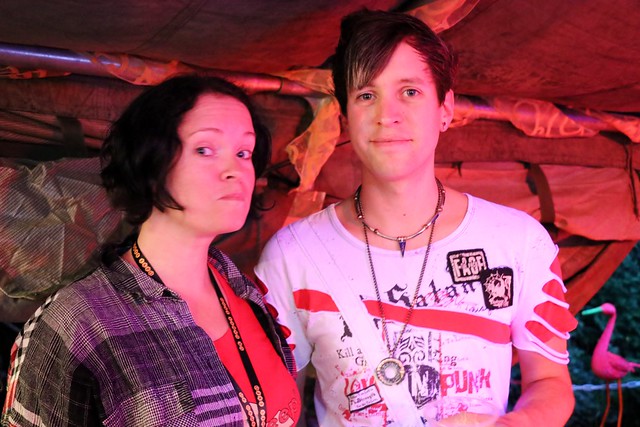 It was the big 3-0 for my little bro this weekend, which involved a party in a giant tent, and lots of music I couldn’t tell you the name of.
Whatever it was, I enjoyed it.

So many things have been played, that’s kind of what happens when you go to the UK Games Expo.

Favourites were Four Elements, Top Hats and Treachery, Gobblin’ Goblins and randomly, Tails of Equestria which is basically D&D but in My Little Pony form.

Basically it’ll be a normal week.