Little B has always been my little Chickadee, since shortly after she came home from the hospital with us. D was quick to jump on the bandwagon, and insisted that she was called ‘Chick’. So when the Twirlywoos hit our screens this spring, and the kids discovered that two of the smaller characters were ‘Chickedy’ and ‘Chick’ too, it was kind of obvious that they’d be keen on watching it!

That’s not the only reason though. The bold, bright graphics, the songs and the storylines are all appealing and just a little bit silly, with plenty of fun and giggles and silly noises to be made. Twirlywoos is a pre-school comedy programme with five lovable characters (eight if you count the Quacky Birds). Great Big Hoo, Toodloo, Chickedy and Chick – and don’t forget Peekaboo! – get up to all kinds of adventures. Now the kids can see what they’ve been getting up to in book form too… 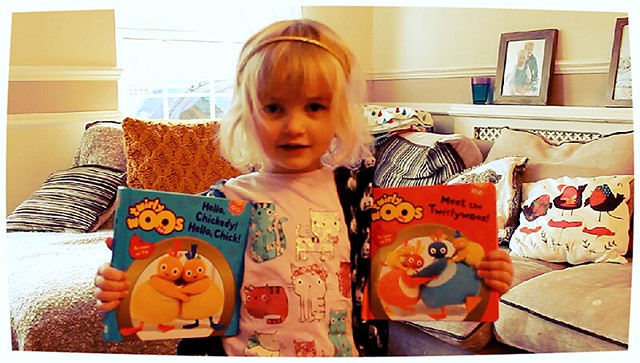 Harper Collins have created some new Twirlywoos Books to accompany the series, and they sent us ‘Hello Chickedy, Hello Chick‘ with lots of hide and seek games in a hat shop, a flowerbed…even inside a giant bubble; and ‘Meet the Twirlywoos‘ full of bouncing, twirling and dancing with a ball. There is plenty of familiar repetition recognisable from the screen, laid out in an easy to follow and durable format that is fun for both little ones and grown ups to look at. Which is lucky, as D (and Little B too) have adopted them as favourite all-the-time reads.

You can see for yourself in our video what D thinks about them both:

I am a member of the Mumsnet Bloggers Network Research Panel, a group of parent bloggers who have volunteered to review products, services, events and brands for Mumsnet. I have not paid for the product or to attend an event. I have editorial control and retain full editorial integrity. I have received a voucher as a token of thanks for this post.

17 Responses to "Review: Twirlywoos Books – A video by D"