Hiding in the middle of a very big field in Chingford, the Waltham Forest Feel Good Centre looks deceptively bland from the outside.

The reception, too, is fairly spartan, with easy check in points for pre-booked members and a queueing area for customers like ourselves, who are not members or who have not booked.

And the reason we were there? The kids had heard that there was a Better Extreme hiding behind the calm, quiet facade of the entrance, to the right of the swimming pool, adjacent to the gym, incredibly tempting looking spa, and airy, well equipped studios, and immediately in front of the athletics track at the rear.

Turns out, this is absolutely the case. But calling it ‘Better Extreme’ doesn’t really do it justice, or explain exactly what we should have expected. Precisely what is contained within the Better Extreme bit is as follows:

This is a large four storey soft play area, aimed at children aged 5 and above. It has a huge variety of obstacles, slides, and spinning things, and also a vertical drop slide for slightly older children.

Fairly obviously, this is not just one trampoline, but instead a whole series of them, lined up in rows, with angled side trampolines for bouncing off of too.

An obstacle course for over 8’s, with 12 different obstacles to overcome – and 3 large pits of giant foam blocks to fall into should that prove to be too tricky. Of course, you can always get out and give it another try…or, if you’re like D, jump into the foam pits deliberately because it’s pretty fun in it’s own right.

There’s also the Clip & Climb facility in the same area – and this can be added to an Extreme session for over 6’s.

Sessions begin every hour between 10am and 5pm, so we arrived 30 minutes early, got our special sucker bottomed socks on (compulsory for all kids, and for adults accompanying under 8’s – they cost £2 a pair but you can keep and reuse them), watched the safety video, and then we were ready to go…

…well, the kids were anyway. First stop was the Extreme Play and I lost sight of them almost immediately – but that was ok, because I could hear them shrieking in excitement and also knew that they couldn’t get out of the Extreme section of the centre without me seeing them. It’s great to have so many options that cater for a range of ages (over 5) all in the same place. After some time, I decided to venture in myself and see what they were up to. Some soft play areas really aren’t adult friendly, but I am happy with this one, which has good height and a fairly accessible bottom layer to walk around too. Seb absolutely loved the vertical drop slide, and it now has the title of ‘favourite thing ever at Better Extreme’.

High praise, considering how much he loved the Extreme Ninja Run. Seb is at the very bottom of the age range for using it, and so he only just managed some of the obstacles, with the final one being fairly impossible for smaller kids (obviously it didn’t stop him trying). He went around several times, mastering each obstacle, with his tongue poking out in concentration and a fair few happy grins each time he slipped into a big foamy pit. I like that the foam is all part of the fun, and also that it’s challenging enough to be interesting over many, many visits.

Ninja run concentration face @better_uk – I had a sneaky go myself too, so much fun!

Whilst Seb was giving his ninja skills a thorough work out, D got to doing some serious bouncing in the Extreme Trampolining part of the park. I don’t really do jumping, but since I had the socks I gave it a little try myself too and it is surprisingly hard work – with all the excitable star jumping D was doing she must have been using a LOT of energy (which is a good thing, obviously). She was certainly very happy about it. 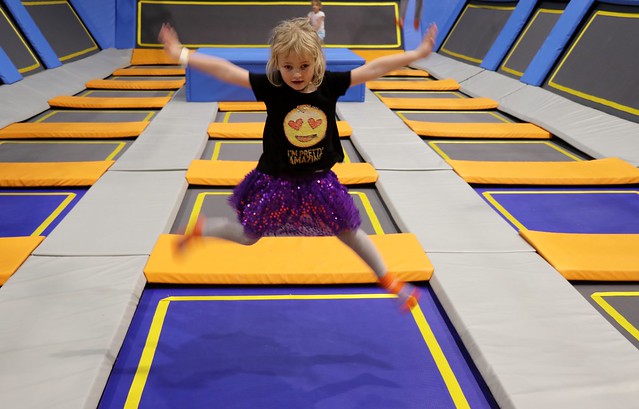 After a while Seb joined her and demonstrated how the angled side trampolines can be used to make the bouncing even more fun. One of the other advantages of having so many different areas to explore is that even if there are a lot of kids there (and there were several, when we visited), there is still space to bounce safely, even if it does involve launching yourself at walls. I never felt that they were going to bash into someone else or hurt themselves.

And finally, before our hour long session ended, Seb decided to do a bit of climbing. Which involved watching a second safety video, before being clipped into a harness which allowed him to give the climbing options on offer a go quickly, easily and safely. He was intrigued by the different point scoring charts, which offer climbing options of varying difficulty, dependent on skill and experience.

There is lots of seating for accompanying adults to plonk themselves into and watch all the goings on if they wish to be less actively involved, which I took advantage of in the last few minutes as the kids had a last-minute dash around the Extreme Play area again.

Then we moved out of the Extreme area, and into the cafe. With a large selection of drinks, snacks and meals on offer at fairly reasonable prices it was exactly what we needed – we sat in a comfortable booth with pizza and chips and stuffed our faces. I wasn’t too keen on the pizza (they are the ready made oven type) although the chips were good, but there are plenty of other options to try. The kids meals are a decent sized portion too. Next time I would definitely go for a hot dog I think!

Talking of next times, the two older kids enjoyed their time at Better Extreme so much that I decided to take Little B to the tots trampolining session to give it a try too. Usually under 5’s are not allowed into the facility (worth bearing in mind if you have kids that span that age range) but on Wednesday’s there is a special session just for little ones, which includes entry to the smaller kids soft play area next to the cafe.

Just like her older siblings, Little B absolutely loved bouncing, and also enjoyed exploring the soft play which was a perfect size to keep her entertained and happy whilst still allowing me to find her easily.

For the price, I’d say we definitely got good value – everyone left happy, and we’ll definitely be coming back again very soon. I’ve made sure our socks are safely stowed in readiness!