And the vast majority of dreams this week have been filled in the most spectacular of ways.

Yes I was at Disneyland.

YES IT WAS AWESOME.

I could just stop writing there, I mean, why clarify the undeniable truth. But equally, maybe the magic will fade (I’ve still got the It’s A Small World song in my head, obviously – and that’s going to be there for another few weeks I’d bet) so it’s worth having a written record of all the things.

Other than reading the Disney Parks Programme (and actually scheduling in some meet and greets so we would definitely see Moana, and not just randomly happen upon things, which is my more usual form of plan) I also read a very very predictable book. A romancey kind of thing. Contemporary romance, apparently, having now looked at the official classification. Anyway, it was called ‘Accidental Hero‘ and it is by Nicole Snow. There were no zombies, no apocalyptic events, no end of the world experiences… just a lot of hot bedroom action and a gallant man racing to the rescue of the young and inexperienced girl who needed his help, which they then both refuse to acknowledge for a bit until it all ends happily ever after. Incredibly easy reading. Incredibly odd to read being in a hotel room with my friend and our two four year olds. But pretty much all my brain could really cope with after long days of Disneyness.

So many  things were watched.

The Pirates and Princesses Parade: 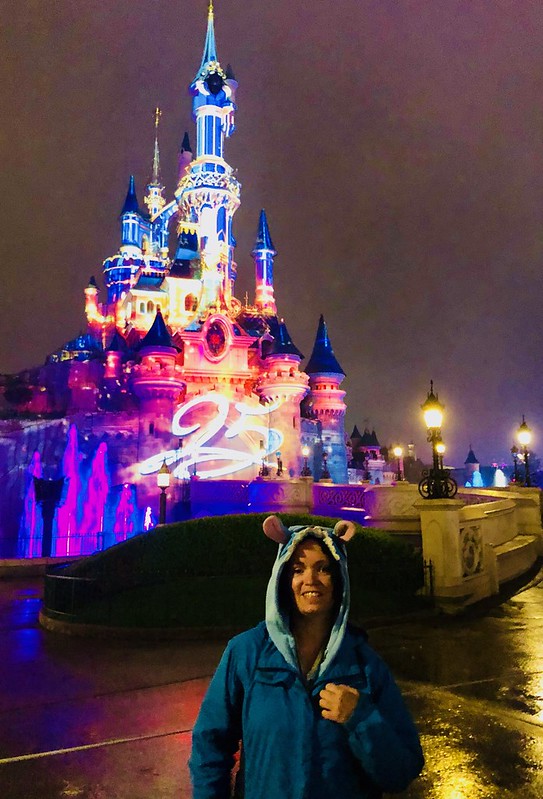 and Mickey and the Magician, which is such a wonderful, magical show whatever age you are. We were all enraptured!

And of course I got to watch the endless grey tarmac of the French roads as I drove to and from Disneyland too. Which was actually kind of enjoyable, in a monotonous and fast paced way.

This week was all about the other people making things for me. Special mention for Marco, our excellent waiter in Chez Remy (the Ratatouille themed restaurant in Walt Disney Studios) who took the time to really interact with the kids and make sure we were all happy with our food and our experience (yes we were, thank you!).

All the Disney gear, all the time 🙂

Even down the pub on Friday night, having returned from Disneyland:

And the retro rock playlist I made for the car. Alice Cooper, Queen, Andrew WK, Aerosmith, Van Halen, Soundgarden, AC/DC, Guns n’ Roses – basically we rocked all the way, and all the way back again.

We took Disney Princess Dobble with us, and that got played a lot. Back to the more in depth stuff next week though.

This week has no Disney. But it does have boardgameclub, and a lot of staying in to win back some brownie points from the long suffering Other Half who had to put up with me staying out all night on Friday. And a visit from Canadian relatives. AND A BANK HOLIDAY WEEKEND.

Banks are not usually my favourite things, but I do love them when they  give me holidays 😀