Well, that’s been my past experience. Of course there are good bits too, which is why I keep on doing it. But the last time I embarked on such an adventure – well, then I had a secret weapon in my arsenal.

Being a group 0+ car seat that converts into a stroller, it’s lightweight, versatile and easily manouvreable to cope with steps (of the static and moving variety), crowded streets, buses, tubes and taxis. At least, that is the theory. I crossed my fingers, and we set out to see how we fared.

Often, when you get a product that combines two things into one, you end up with two mediocre things rather than two separate excellent ones. But I have to say, in this respect the Doona does not fit that generalisation. Walking to the tube station with the Doona in stroller mode, Little B was comfortable and happy, and negotiating pavements, curbs, roads and obstacles was no problem at all. The handle when extended is a comfortable height for pushing, and as a stroller the Doona feels very sturdy too, despite being so slimline. There is no integrated storage in the Doona, but we had attached the Snap On Storage which easily contained all the essentials needed for a day out with a small baby. Even with the Snap On Storage attached, the Doona maintained a good sense of gravity and has great kerb pop. By the time we reached the station, everyone was still smiling. Round 1 to the Doona!

Round 2: getting up and down steps
This was made very easy by the ability to turn the Doona into a car seat in less than 10 seconds. I unclipped the Snap On Storage, lowered the handle, depressed the wheel retraction switch, and was left with a car seat to carry over the footbridge in one hand and a bag to carry in the other. Once we got over the other side, the wheels came back out, the handle was up again and we were ready to board the train. Doona wins again! 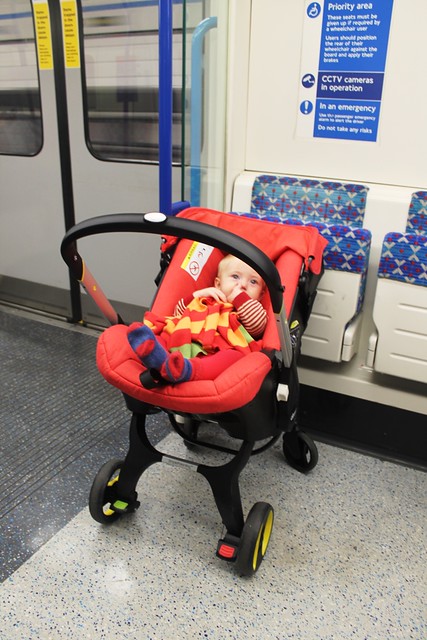 Round 3: Negotiating central London crowds
Because the handle can be retracted and moved upright, the Doona only had a very small footprint in our crowded tube carriage, compared to other strollers. The generous canopy came in useful here too, as I was able to block out a lot of the external bustling and clamouring when Little B decided she was feeling sleepy. I also found that it was easy to manoeuvre one handed (with three children with me, there was often a small child attached to the other one) and boarding and disembarking from tube trains and buses was reasonably easy too.

Being a car seat, rather than a dedicated stroller, I didn’t want to leave Little B sitting in it for too long at a time, and with us making lots of sightseeing stop offs and slotting in snack breaks this wasn’t a problem at all.
Usually when we are out, if Little B exits her pushchair then Bubby D will dive into it to rest her legs a bit but of course she is much too big for the Doona, which only caters for children up to 15 months. And due to the nature of the retractable wheels, it’s not suitable for a buggy board either. This is one downside to taking it out as the chosen stroller for the day BUT it is more than made up for when you meet the next challenge – flagging down and getting into a London taxi cab. 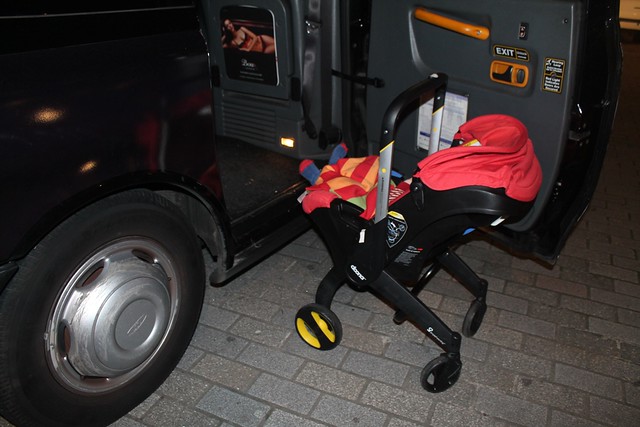 At this point, the Doona really comes into its own. 10 seconds later, and the Doona was a fully functional car seat, ready to be easily and securely belted into the back seat. I am always incredibly nervous taking the kids in taxis due to the safety aspect, but at the same time if we need to get somewhere quickly and easily (in this case, back to the station in time to catch our train) then the option to have all three worn out kids safely ensconced in a small vehicle rather than having to negotiate various steps, tunnels, escalators and platforms is an incredibly useful one. Especially when you’ve managed to pick up a bag or two of stuff to carry on your travels as well! On this occasion, the taxi ride was a dream – Little B gazed around at the sights for a while before falling asleep, and the Wee Man and Bubby D were thrilled about being in a taxi on the ‘flippy down seats’. Even the driver was impressed – the first two taxi’s that saw us drove away pretty quickly when they saw several children, bags and a pushchair but the third one decided we wouldn’t be too much trouble and was rewarded for his decision by being thoroughly amazed by the Doona! He couldn’t believe how quickly and easily we were in and out, and how happy all the kids were being safely strapped in.

Enjoying the view from her seat in our London Taxi #doonamoments 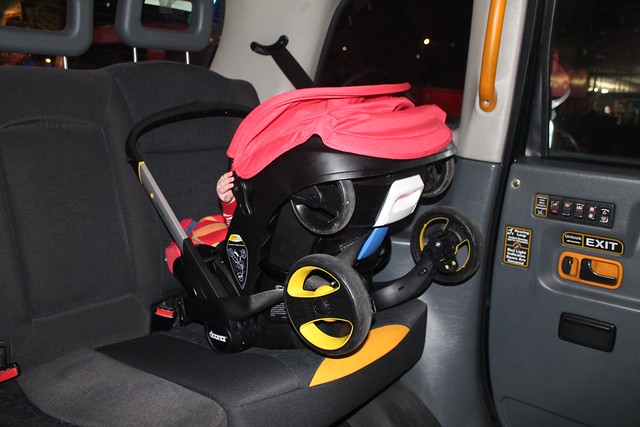 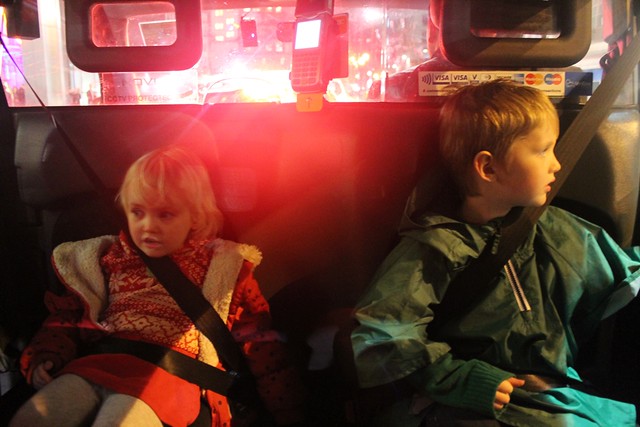 And then we were at the station, and on the train home.

The verdict? Doona wins the day.

Being able to safely and easily strap Little B into the taxi was fantastic, and the Doona worked well as a stroller around London too. If you’re planning a day of sightseeing with plenty of opportunities for little ones to get out and play rather than hoping to use the pushchair as a packhorse or a seat for several hours, then the Doona is a brilliant, sanity saving option. Half term is coming… and I’m actually looking forward to our next adventure 🙂