You know when kids get obsessed with a tv programme, and they can tell you every little thing about every single episode? (Probably because they’ve watched it about 3000 times on repeat… how do kids do that without exploding, anyway?). Well, this half term they can put that encyclopaedic knowledge to good use. Because there is a new app in town, and its called ‘SpongeMaster’.

Having just said that out loud in my head, it sounds like some kind of new miracle kitchen cleaning product but what it actually is, is an app that has been created to run alongside special episodes of Spongebob Squarepants. Download it for free on iOS or Android, switch on Nicktoons, and let the fun begin.

During each special episode, questions arrive on screen* (the TV one) whilst corresponding answer buttons arrive on the other screen (the Android or iOS enabled device one). The faster you click the correct answer, the more points you get.

And even better than being allowed to play on a tablet AND watch TV at the same time (something that my kids are very excited about) there are prizes to be won for the highest point scorers. The top three on the leader board after each game will win a Spongebob Goody Bag with some great items from the Nickelodeon Store in Leicester Square (2nd and 3rd place) or a Kurio Watch (1st place).

The more games you play, the more chance you have of winning the overall grand prize too, which of course includes the ubiquitous SpongeBob Goody Bag – but also a Nintendo Wii, and an iPod Touch. Suddenly I’m wishing my knowledge of Spongebob was slightly more encyclopaedic than ‘pineapples feature heavily…and he has a friend who knows karate…’. Oh, and I’m not aged 15 or under either, which is another condition of entry. Bad news for me, good news for Seb who at the qualifying age of 7 knows considerably more about Spongebob Squarepants and his friends and watches Nicktoons far more frequently too. 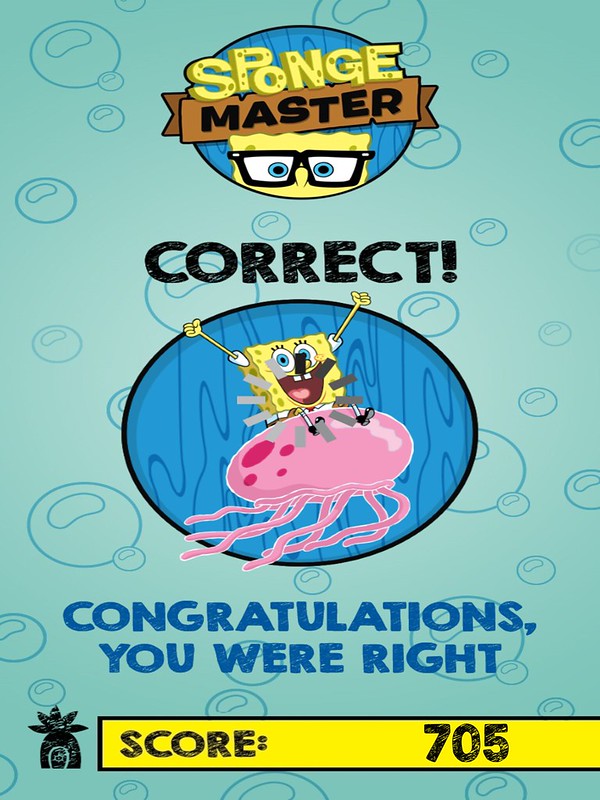 When can you play SpongeMaster?

Anyway, if you also happen to know more than me about the friendly little yellow fella, or should I say you know someone aged 15 or under who does, then you’re in with a chance – as yet Seb has failed to appear on the leaderboard but there is still time because you can continue to be a SpongeMaster every weekday until the 24th February (between the hours of 10am-4pm, on the hour, every hour – that’s a grand total of 60 chances to win!).

If you need to know more before you get going with SpongeMaster, then you can find out all about it at nicktoons.co.uk/spongemaster. Grab yourself a krabby patty and get on with it!

*make sure you choose the right TV service when you sign in, otherwise you will end up with the app and the TV being slightly out of sync – not the best idea when speed = points!

One Response to "Are you a SpongeMaster? Watch tv, play the app, win prizes!"