Pouring things is one of Little B’s current favourite things to do. In official speak, she is pretty obviously in the middle of a ‘transporting schema’ at the moment. Which basically means that she is obsessed with moving objects from one place to another.

Belle’s Tea Cart from Jakks Pacific is, therefore, pretty much ideal for her right now – being something that moves, with things on top that also move! And just to add in an extra element of awesome, it’s themed around the tea cart in Beauty and the Beast… another thing that Little B is very much into at the moment following our recent visit to Disneyland Paris.

It arrived in a very large box, and inside the box Belle’s Tea Cart was flat packed but very well presented, waiting to be put together. Often when this happens with toys, my heart sinks as they can be quite tricky to put together (or even to get out of the box), but in this case it was fairly simple to get it all unpacked, and incredibly easy for me to put together – because I got the Other Half to do it 😉 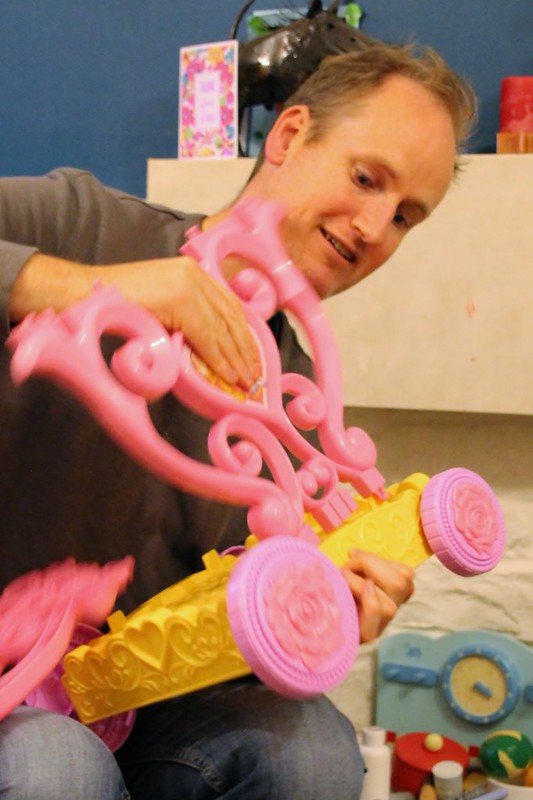 What Comes With It

The Tea Cart is made of four interconnecting pieces – the base, two sides, and a top with a handle and inset rotating section that Mrs Potts, Chip, a second teacup and two spoons sit on top of. I was initially worried that the Tea Cart might be a bit unstable, because individually the bits feel a bit flimsy – but it is well made and the pieces click together easily as long as you use a reasonable amount of strength. We were left with a nice sturdy Tea Cart that Little B was desperate to start playing with – and so was her sister, D.

Belle’s Tea Cart is aimed at children aged 3+, and Little B is only 2.5, but there are no small pieces and the handle is the perfect height for her to push it around easily so I don’t have any problem with her using it. Which she loves to do, particularly as it plays ‘Be Our Guest’ when the wheels are turning, and Mrs Potts and her children spin around on their platform. The music can also be triggered by pressing a button on the side (and, more importantly, switched off using the controls on the underside of the top, which all parents will be thankful for at some point!). D enjoys playing with it as well, but it is very clearly the firm favourite of Little B – she can happily spend a lot of time ‘pouring’ tea, pushing the cart around the house, and getting into character whilst she does it, too.

It’s quite a large toy, so if you don’t have much storage space that might be an issue – but we have found that it is useful for storing other bits and pieces of kitchen role play equipment so it can be less of a space hogger than I originally thought. It also looks really lovely, the attention to design is obvious and it’s all very well made. Which is lucky, as it’s been bashed around a lot throughout Little B’s transporting antics! There is a small sticker at the top which states that real liquids should not be used with the set – given the electrical nature of the rotating musical bit at the top I guess that is obvious, but Little B was initially convinced that she should be able to use it to pour ‘purple juice’. I’m also guessing the various bits wouldn’t last too long in a dishwasher – luckily I noticed she had deposited them in there before it was turned on! Once she realised that they were for ‘pretend tea’ and not actual drinking cups, we moved on to the hilarious game of serving everyone ‘worm tea’ and ‘ant juice’ instead, and everyone was happy. Even her 7 year old brother enjoyed getting involved with that game.

Unlike some toys which are exciting for a day or two and then never get played with again, Little B is still regularly using and enjoying Belle’s Tea Cart, the batteries are still working, and the moving bits still move. Priced at around £50 it’s not cheap, but given the quality and the hours of play we’ve had from it so far, I think it’s reasonably priced – the perfect gift for any little Disney Princess fan. 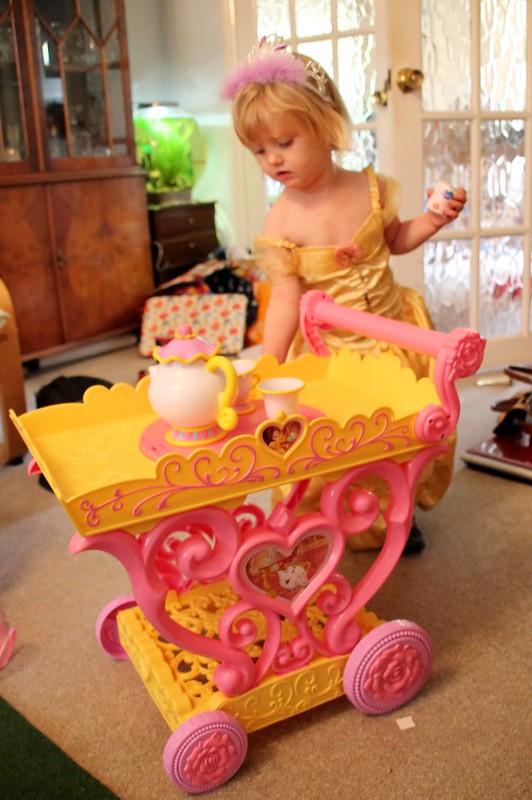